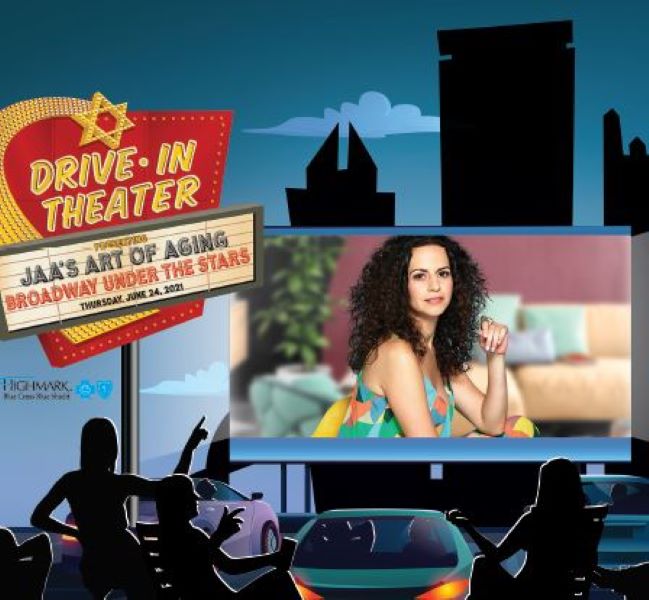 Tickets are now on sale for Broadway Under The Stars, The Jewish Association on Aging (JAA’s) annual Art of Aging benefit, a drive-in where guests enjoy a live concert on a big screen from the comfort and safety of their own vehicles.

Ms. Gonzalez invites guests to be a part of the fun via this promotional video. https://youtu.be/xiMiWKdmmdA

Gates open at 6 PM with strolling entertainment including local celebrities, coolers filled with drive-in fare for each guest (with dietary laws observed), and a pre-concert presentation that begins at approximately 7 PM.

Safely distanced parking and bring-your-own lawn chairs are encouraged. In the spirit of a Heinz Field tailgate party and per Pennsylvania Liquor Control Board regulations, BYOB is an option for guests 21 and older.

A view-at home option is also available for those not able to attend at the stadium.  Residents in all JAA communities will be able to watch the show live from their apartments.

Benefit tickets, including those specially priced for students, are on sale now at bit.ly/AOATickets21.

Raffle tickets to win a trip to Broadway are now available at bit.ly/AOARaffle21

About Mandy Gonzalez: Starred on Broadway in Hamilton and Wicked, originating the role of Nina in the Tony Award­­–winning show, In the Heights; on television’s Madam Secretary and Quantico, and as a recording artist whose debut album, Fearless, reached #13 on the iTunes pop charts. An author, Mandy was recently featured on MSNBC with her middle-grade-school-aged novel also called Fearless, and published in the Harvard Business Review regarding overcoming one’s fear of public speaking. Founder of #FearlessSquad—a social media movement for inclusiveness and belonging.