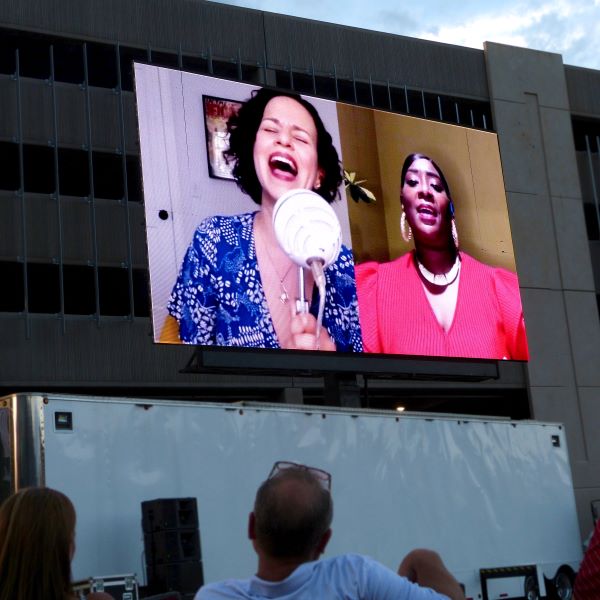 Sylvia Booker Wows Crowd at “Broadway Under the Stars”

She came, she sang, she conquered!

JAA’s Sylvia Booker virtually belted out “For Good” from Wicked alongside headliner Mandy Gonzalez at the 2021 JAA Art of Aging benefit, “Broadway Under the Stars” on June 24 at Heinz Field.

“Thank you JAA, I love you. Thank you Weinberg Terrace. I love you. And thank you for the opportunity,” shouted Sylvia into the microphone of emcee Susan Koeppen following the duet shown on the giant screen to guests at the event.  A standing ovation and cheers from her new fans helped round out the thrill of seeing herself for the first time singing with a Broadway star.  She had recorded her part (the Good Witch, Glinda) a week prior to the event, providing Ms. Gonzalez’s engineers the ability to edit her part (Elphaba, the part Mandy played on Broadway) together to meld the two voices into one.

Ms. Booker’s photo and bio appeared alongside Ms. Gonzalez’s in the event program guide, saying,  “Throughout the pandemic, Sylvia has been a source of strength at JAA’ s Weinberg Terrace, where she has worked as Resident Care Aid for seven years. A native Pittsburgher, Sylvia began singing at the age of nine, inspired by Patti LaBelle and Whitney Houston. She is a long-term member with Potter’s House Ministries and the Pentecostal Temple Choir. She performed with the Pentecostal Temple Choir under the direction of Nikki Porter Smith at Heinz Hall with the PSO in 2019.”

Residents of Weinberg Terrace were able to view the event live from their apartments back in Squirrel Hill.  A reception and celebration of Sylvia’s new “celebrity” status is planned with the residents in the coming weeks.