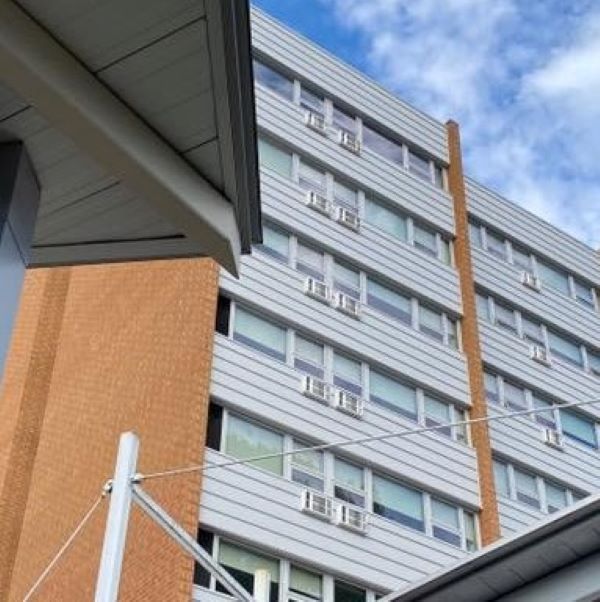 The Debut of the New Riverview

For about two weeks, Dee Laine left her apartment from 8 a.m. to 4 p.m. each day and headed to the first floor of the B building, where The New Riverview supplied snacks, PB&Js and coffee for residents while their apartments received a much-needed makeover.

“The renovation was a little stressful, but they made it as comfortable as possible,” said Laine, 94, who moved into Riverview nine years ago. “And the end result is beautiful.”

Her apartment is now decked out with new insulation, windows, flooring, kitchen appliances and more.

“There had not been a lot of work done in the buildings for many, many years,” said Amy Weiss, president of the board of Riverview Apartments Inc. “They really sorely needed to be modernized.”\

With the new features came a new name: The New Riverview.

“We wanted to keep the flavor of the old because we had been so successful for so long,” said Weiss. “But we just felt with the new apartments and the new spaces that it deserved to have a new name.”

The renovation was a team effort: Government officials like state Sen. Jay Costa and state Rep. Dan Frankel, Riverview staff and board members, private trusts and Jewish Association on Aging staff all worked together to make the $17 million project a reality. It was financed by low-income housing tax credits from the Pennsylvania Housing Finance Agency. And the Jewish Federation of Greater Pittsburgh funded the consultants and experts required to complete the U.S. Department of Housing and Urban Development application and provided tax credit guarantees for the construction.

The New Riverview, which sits on the JAA’s campus, affiliated with the JAA in March 2018.

“It was a natural progression for JAA and Riverview to come together, and the renovation presented the ideal opportunity as this was a huge project for Riverview to take on,” said JAA President and CEO Deborah Winn-Horvitz. “As older adults’ needs continue to change and more individuals are interested in aging in place, we are thrilled to be able to offer a beautiful place for our community’s seniors to call home.”

The A building had a more extensive renovation than the B building owing to the expansion of its apartments. As a result, there are fewer Riverview apartments now — a drop from 221 to 191 — but all have at least one bedroom (some have two), and 42 units are fully accessible.

And out of the 191 apartments, 151 are designated for tenants whose incomes are 60% or below the area median while the other 40 apartments are market rent. The New Riverview is subsidized by HUD.

Weiss is grateful for the sacrifices tenants made, temporarily relocating to allow for lasting changes.

“I would just shout out a huge thanks to the tenants for being incredibly patient and understanding,” said Weiss. “The staff did an amazing job just trying to juggle people around so that they were as comfortable as possible under the circumstances.”

People are already snapping up the apartments. The New Riverview had just nine openings as of press time with a growing waitlist.

“These are going to go very fast,” said Weiss. “We’re going to need to build another building down the road hopefully someday.”

The New Riverview is restricting visitors right now due to the pandemic, but Laine is enjoying the renovated space. She goes outside with a few people, takes walks and gets food delivered to her refurbished apartment.

“I’m very content,” she said. “It’s always nice to have something new, even at our age.” PJC

Kayla Steinberg can be reached at ksteinberg@pittsburghjewishchronicle.org